Want to know more about us? 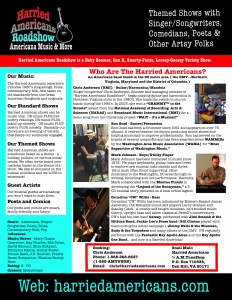 4) CONTACT US for audio samples or anything else you need.

Chris Anderson (BMI) – Guitar/Harmonica/Mandola
Singer/songwriter Chris Anderson is founder and managing member of “Harried Americans Roadshow” began playing guitar and harmonica in Northern Virginia clubs in the 1980’s making the switch to church bands during the 1990’s. In 2003, she won a “GRAMMY™ in the Streets” award from the National Academy of Recording Arts & Sciences (NARAS) and Broadcast Music International (BMI) for a demo of her song “Their Leader” from her Christian Christmas project “WAiT – it’s a Musical!”  More recently, she won GOLD in the 2018 Mid-Atlantic Song Contest (Open Category) for her song about gerrymandering, Just Change The Boundary.

Bassist Niels Jonker started to play flute in high school, but an argument with the music teacher ended that endeavor. His musical expression over the next few decades was limited to playing other people’s music as a party, club, and wedding DJ. In 2011 he realized making music might be fun, and an upright bass seemed like a good plan. As a mostly self taught player, he’s since shared the stage with artists like Bryan Bowers and Tony Trishka, playing from the U.K. To California. He’s delighted to join the Harried Americans band !

Ron Goad – Emcee/Percussion
Ron Goad has been a drummer since 1961 and appears on over 75 albums. A retired teacher, he enjoys producing music shows and helping musicians to improve professionally. Ron has served on the boards of several nonprofits and has been awarded six WAMMIEs by the Washington Area Music Association (WAMA) for “Most Supportive of Washington Music.”

Mark Johnson – Keys/Utility Player
Mark Johnson has been immersed in music since 1972. He plays keyboards, guitar, bass and loves to explore new musical instruments and styles.  He is most often found supporting other musicians in the Washington, DC area through co-writing, recording and live performance.  Recently, Mark collaborated with the Mantua Finials in developing the “Legend of the Bunnyman,” a 3-CD musical story centered on a local urban legend