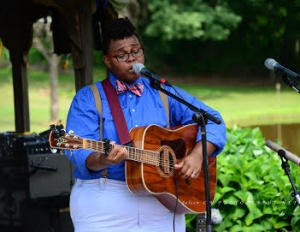 DC’s Crys Matthews blends Americana, folk, jazz, blues, bluegrass and funk into a bold, complex performance steeped in traditional melodies and punctuated by honest, original lyrics. Having been compared to everyone from Toshi Reagon to Tracy Chapman to Ruthie Foster, Matthews’ eclectic infusion of genres has won her honorable mentions at the 2013 and 2014 Mid-Atlantic Song Contest and extensive radio play from Woman of Substance radio to WTJU-Charlottesville and WMRA-Harrisonburg to KBOO-Portland.

Equally at home in an acoustic listening room as she is on stage at large music festivals, Matthews has quickly gathered a loyal following on the east coast playing such prestigious venues as Jammin’ Java, The Hamilton and Busboys and Poets. Matthews’ festival and showcase roster has included SXSW, the 40th Michigan Womyn’s Music Festival, Folk Alliance International, 30A Songwriters Festival (which she will be performing at again in January 2016), Northeast Regional Folk Alliance and many more.

When Matthews entered a talent show at Appalachian State University on a whim in 2002 with the first song she ever wrote and won first place, she never expected to one day be performing with artists she used to listen to on her iPod, such as Melissa Ferrick (Out/Loud 2009) and the Indigo Girls and Dar Williams (Folkfest St. Pete in 2010). Matthews has shared stages with Graham Nash, Chris Pureka and Liz Longley, as well as several regional artists such as Owen Danoff, Summer Osborne, and Eliot Bronson.

Matthews’ first studio album, Backroads and Driveways was produced in 2011 by Karen Kane who engineered Tracy Chapman’s first EP. After hearing Crys play at a festival, Kane immediately wanted to collaborate with her. The following year Matthews released her sophomore album A Lesson Learned and an EP entitled The Izzle Ballads. In 2014 Matthews released her fourth studio album Come What May. A departure both musically and lyrically from her earlier works, Come What May bridges the gap between contemporary folk with simple storytelling filled with candor, emotion and history. Then in August 2015, Matthews released a second EP called The Izzle Ballads, vol. II. Just as in the first installment, Matthews sings about hope, love, perseverance and justice with an ease and candor that one might expect from a southeastern North Carolina native whose mother happens to be a preacher.

A prolific lyricist and composer, Matthews has found inspiration in her surroundings; from driving through the Blue Ridge Mountains to the compelling and heartbreaking love story of Richard and Mildred Loving. Thoughtful, realistic and emotional, Matthews’ songs speak to the voice of our generation and remind us why music indeed soothes the soul.